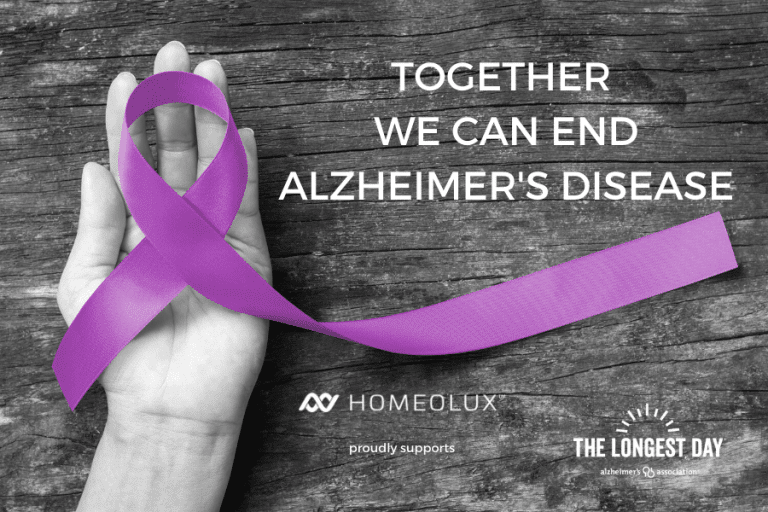 10 Ways to Raise Awareness for Alzheimer’s Care and Research

June 20th is summer solstice – it’s the longest day of the year in the Northern Hemisphere.  As we celebrate the year’s longest day of sunshine, many people also are coming together to fight the darkness of Alzheimer’s by participating in the Alzheimer’s Association’s “The Longest Day” event. The purpose of the “The Longest Day” is to raise awareness for Alzheimer’s care, support and the latest Alzheimer’s treatments. From sunrise to sunset, families and friends of all ages will be choosing an activity or events including walking, exercising, cooking and mediating to honor those living with Alzheimer’s disease and their caregivers. The longest Day may look a little different this year due to physical distancing but the commitment remains the same.

At HomeoLux we are hosting a fundraising event to show our support for both the invaluable work of the Alzheimer’s Association and especially for families who battle cognitive decline every day. Learn more about our June 19th Meditation for Caregivers virtual event.

Here are 10 things you can do to celebrate the longest day:

2. Create your own fundraiser – think of something you love to do and set up your own event.

3. Grab your friends and form a team to help you raise money and awareness.

4. Volunteer your time to support a fundraiser that is already established.

5. Donate to The Longest Day – join as many fundraising events as you can throughout the day.

6. Wear Purple. Purple is the official color of the Alzheimer’s Association, and throughout June, people wear purple to raise awareness and help fight Alzheimer’s. Purple clothing and accessories are available at Shop for a Cause.

7. Spread the word about Alzheimer’s Awareness on Social Media. Share your photos, stories and fundraising successes on social media and show your love across the world by using the hashtags #TheLongestDay #ShowYourPurple and #ENDALZ.

As we celebrate the year’s longest day of sunshine, many people also are coming together to fight the darkness of Alzheimer’s.

8. Be informed and share your knowledge. Discover truths about Alzheimer’s disease by visiting alz.org/abam to learn and share information about the disease.

9. Take care of yourself. If you have been diagnosed with AD or you are a caregiver or friend, it’s never too early or too late to start a wellness routine for yourself. Commit to regular exercise and healthy diet habits; adopt a light therapy habit and put yourself on a road to strengthen your mental acuity.

10. Join a Walk to End Alzheimer’s. Here are some cities and dates:

Every dollar raised on The Longest Day goes directly to the Alzheimer’s Association to provide care and support to those facing Alzheimer’s, drive research toward treatment, prevention and a cure, and to advocate for the needs and rights of people affected by Alzheimer’s.